Kyoto Uji Matcha is our highest grade matcha, prepared from young first flush green tea leaves at Uji in Kyoto, the birthplace of the Japanese tea ceremony. Smooth, mellow with a pleasant natural sweetness and none of the bitterness found in lower grades. A top quality Matcha. Vibrant, green color in the cup.

HOW TO MAKE THIS TEA

Ocha & co is always my go to for matcha and you can't go wrong, but I do think the organic matcha is a better value.

We planned a trip a few months ago and realized less than 2 weeks away from departure that our usual delivery wouldn’t arrive in time for the trip. I immediately placed an order about 7 days before departure and was delighted to have it arrive 2 days before we left. Our Matcha Mornings are a wonderful way to start the day, and were even better on vacation!

I absolutely love the Kyoto Uji Matcha. It has replaced my morning coffee and I feel so much better. No more afternoon energy slump. I highly recommend! 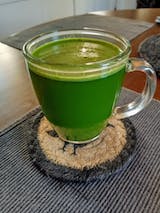 This is by far the best matcha I've ever had! Not to mention how great a deal it is to buy from Ocha & Co. A couple months ago, I bought a 40g pack of ceremonial grade matcha (which is a pretty high-quality matcha) from this new matcha site that a lady had launched. The matcha was good and all, but it was a whopping $60 dollars for not that much matcha. It didn't seem worth the price. I'm not really an expert on matcha, so at the time I thought maybe this is the normal price for such high-quality matcha. However, when I was running out of matcha I decided to look on other sites to find it and I came across Ocha & Co. I am SOOO glad that I did because I found the same kind of matcha sold here for only about 1/3 of the price! I was able to buy two packs of matcha (one 100g pack and one 50g pack) for only $24 dollars each! In total I ended up paying less for 150g of matcha as compared to the other $60 dollar matcha in which I only received 40g. Now don't think for a SECOND that because they are cheaper, the quality of the matcha is lower. IT'S REALLY NOT. Ocha & Co's matcha is just as good quality as the other one; maybe even better. So in conclusion, I'm really happy that I decided to buy from here. BEST DECISION EVER! :)

This matcha has a great price point, tastes delicious, and is of a high quality. The powder is vibrantly green and very finely ground, with no larger flecks like many other matcha teas I’ve purchased in the past. I’ve used it for hot and cold lattes so far, and plan to use it for baking very soon—it’s flavor profile is not overly grassy, and should work well in a number of recipes. I will definitely be repurchasing in the future!